After Google Wave, Orkut be the Next?

Munaz Anjum
Sunday, August 29, 2010
facebook number 1 orkut down orkut vs facebook popularity of facebook vs orkut
The growing popularity of Facebook poses a great threat to Google’s products. First major jolt was a shutdown of Google wave. In coming years, I also predict a closure of Orkut which was very popular in India until ComScore published its report on August 25, 2010 saying Facebook grabbed the no.1 ranking in the social networking category for the first time in July with 20.9M visitors, up 179% versus year ago. Orkut registered a growth of only 16% in the same time period.
To be proudly saying, we Indians hold now the 7th largest market for social networking sites after US, Brazil, UK, China, Germany, and Russian Federation. With the startling facts revealed by ComScore about Facebook being number 1 beating Orkut in India must not have sounded sweet to Google.


I have searched the popularity of Facebook vs Orkut using Google Insights. See left the screenshot. 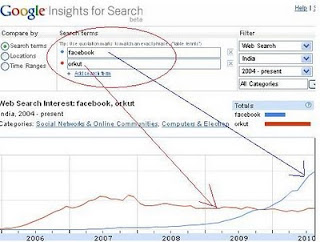 Orkut retained the number 1 position in social networking site in India and Brazil. But it seems that the growing popularity of Facebook poses a great threat to this Google’s product. The question now is – why users are leaving Orkut and migrate to Facebook? The reasons are many, but I personally think that the most important reason is the burgeoning growth  of many user friendly apps that make Facebook a true collaborative platform –all in one place.
Personally speaking, I spend now more time on Facebook than on Orkut. Now-a-days, I always hear from my friends that they are closing or abandoning orkut account and migrating to Facebook. I find my peers on Facebook more often than on orkut.

In short, the growing popularity of Facebook is a wake up call for Google to save Orkut. Otherwise, it might meet the same fate as Google Wave has met recently.