Rajaram's greatest achievement? AdSense -you must have heard of it -the ad system that places Google ads on blogs and Web 2.0 apps, keeping them financially viable against all business logic? After being hired in 2003, Rajaram supposedly worked to create the ad publishing network which now brings in, Fortune writes, "one-third of Google's revenue." 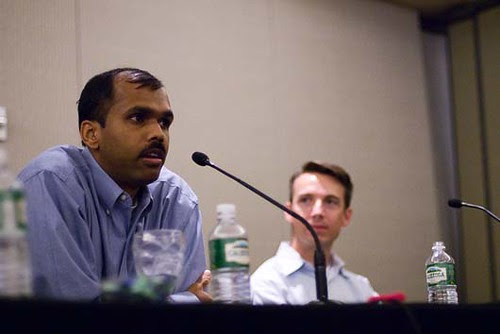 When asked the reason for his resign, he quips:

"I’ve been having the itch to do something entrepreneurial for awhile now. I’m in my early 30s and I have some experience and financial security, so the time felt right.” His passion has driven him to assume the role of evangelist for media video advertising. As a technologist and writer, Gokul writes many online articles and blogs passionately about media and video advertising. Here is his video in which he talks about online video ads that drive the search.

Gokul earned his M.B.A. from the MIT Sloan School of Management, his M.S. in computer science from the University of Texas at Austin and his B.Tech in Computer Science from the Indian institute of Technology, Kanpur. It was in IIT where he was awarded the President of India's Gold Medal for being class valedictorian.

Earlier in his career, Gokul was a Technical Lead at Juno Online, an early internet service provider now part of United Online, the second largest ISP in the US. At Juno, he was part of the team that developed Juno's online advertising platform. Gokul also worked as a Software Engineer at Sun Microsystems and as a Product Manager at Onetta, a telecom hardware company.

Hats off to Gokul for his new venture!