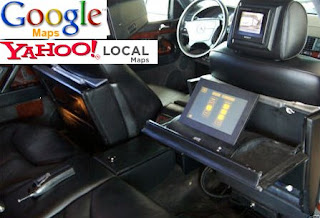 Mercedes-Benz has already confirmed regarding the inclusion of additional feature of Google, and Yahoo Maps for its S, CL, and C class models, sources at techomical disclose.

The new feature is to be called ‘Search & Send’. This feature will help the owner of the car to send directions, to be obtained either from Google or Yahoo Maps, to their vehicles’ navigation system via a new ‘Send to Car icon.

‘Search & Send’ is going to be the first feature of its kind to be made debut on September 5th, 2007.

Can you guess-Why Mercedes-Benz has chosen both Google, and Yahoo instead of just one of them?

It could be because Mercedes-Benz is a highly brand conscious automobile maker and they don't want to alienate their customers by offering a service that they might not regularly use. So maybe they wanted to cover their bases by appealing to two rivals' users rather than choose one and risk adoption by some of their customers and dislike by the others.

Google and Yahoo have both released improved map tools, with Google Earth offering real-time traffic updates along with alternate directions.