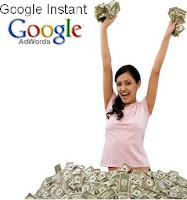 Google Instant has already created suspicion and fear about the future of SEO. Since its launch, there came up various news and articles about the impact of Google Instant on SEO. The author like Steve Rubel believes SEO becomes irrelevant while Matt Owen disagrees with Steve. Whatever may be the pros and cons, one thing is certain that Google Instant will change the organic users’ behavior but more than this, it will bring an instant changes in the behavior of sponsored users as well. And that’s where the main goal of Google lies. The ‘Giant Search’ discourages organic clicks and directs the users more towards sponsored links.
The moment you start typing your queries, 80% visibility falls on sponsored links while 20% visibility falls on organic SERP. This concept is based on the eye tracking behavior of users, a study conducted by Enquiro Research a few years back.
See the below screenshot.

Apart from large exposure of sponsored links, Google Instant has other commercial intent. That is to increase unnecessary impressions for AdWords advertisers. You must be surprised to know that Google just now came with a new definition of ‘Impression’. Check out Google AdWords to know how Google counts impression Now! Even though a user types a query and stops typing for 3 seconds and results are displayed, the available display of advertisements on sponsored links will be counted as impressions.
With the launch of Google Instant, many Google watchdogs on twitter post it as ‘fast changing event’ during the event streamlined on Youtube. Melissa Mayer says that the primary benefit of Google Instant is to save the average searchers 2-5 seconds and by this logic, they will be able to save 11 hours of users.
@Marissa, are you sure you have the same intention behind the launch of Google Instant?
I’m not sure if you have really holistic motive behind this. As far as I analyze, you have vested  'commercial intent' to consume advertisers' money fast really fast! My analysis is based on the following logic. If you have counter logic to offset my analysis, I welcome your comments.

1. A new definition of Impression is coined by Google. With Google Instant, Google has now a wider definition of ‘impression’. If CTR is a function of clicks in proportionate to impression, you will lower ‘Quality Score’ and ask to increase bids. This is going to happen for ‘average users’ (Google says) but for me, they are average advertisers or small businesses entrepreneurs.
2. With Google Instant, Google will have a wider ‘web’ to spin advertisers’ money. Since the company’s biggest challenge is social media and it has always failed in this area, the biggest plan might be to spend more on R&D to compete in social networking space as Google R & D budget is increasing and planning to extend R & D divisions across the globe
3. Google has also added CTR feature in Webmaster Tool sometimes back. I have already written an article as how Google might count CTR for displaying organic results as well. This might make an SEO job tough in future.
4. By default, Instant is ‘on’ when you type. Only when you select ‘off’, it will go off. But do average users really care? Surely not! Similarly, If you look at AdWords, ‘Content Network’ by default in setting is turned on unless you turn off. Selecting default setting in adwords unnecessary increase impressions. I believe AdWords experts know what I mean to say.


6. Google instant does not display any results of pornographic key phrase. Type anything vulgar it will not show results (For ex. just type p###, f###, etc). This is not a bug. Rather Google does not accept vulgar and pornographic advertisements. So, no sponsored results are there. Do you still want more proofs to verify that Google Instant promotes sponsored links but not organic clicks?
All these points confirm me as how Google Instant discourages organic clicks and promotes sponsored links clicks. Well, from the talk of Google Caffeine to the launch of Google Instant, it seems that Google is going fast, very fast and asking the ‘average runners (users)’ like us to Run Fast, Type Fast, Click Fast, and Spend Fast! What an idea sir ji!!


Anyways, listen to a song on Google Instant sung by Jnathan.